Nike marketing strategy has always been something that inspires marketers across the globe. Nike is the largest sneaker maker in the world and is coming off of a year where they made $39.12 billion dollars. They have over 1,150 stores worldwide, with 76,700+ employees. It’s not a long shot to say this, but Nike is at the top of the game even though the global economy is slowing down.

Nike was founded 55 years ago by Phil Knight and Bill Bowerman, and now it is the most valuable brand in the world. The iconic slogan of the brand, “Just Do It” still resonates with their customers, even after 29 years!  Anyone can connect with it and have their own interpretation. With 3 simple words, Nike has made its ideology clear – something that makes Nike marketing strategy really impressive. This has enabled it to automatically attract, engage, and delight with its ideal customers who are now raving global fans.

Some might think that the success of Nike is because of high-profile celebrity endorsements. World-class athletes such as Serena Williams, Rafael Nadal, Cristiano Ronaldo, and LeBron James, who definitely have helped the brand in becoming a global name. More on this later as we discuss how Nike marketing strategy is driven by influencer marketing. But, it was Nike’s ideology- clearly and compellingly communicated through its marketing- that led the company to become the most valuable brand in the world.

When it comes to North America, Nike has the largest market share at around 27.4%. In basketball footwear, Nike dominates with a whopping 96% share.

How did Nike nail it, though? After observing their marketing approach (and oh-so-naturally being enticed to buy and love their shoes), we noticed 3 big themes in their marketing strategy. Here we spill the sauce on them.

1. Compelling and Meaningful Ads That Tell a Story

Stories. Who doesn’t love them? We grew up with them and will continue to listen and share them- even when we’ll be in need of dentures. Similarly, social media ad campaigns have become instrumental for brands to succeed. With so much noise on the big social, Nike marketing strategy has been driven with an impeccable ad strategy.

Nike recognizes this human appeal of the story and thus, never directly sells its products. Instead, it chooses to tell a story. The product is a part of the story (mostly the differentiating tool that led the person to emerge victorious). But, it is never the centre of attention in the ads. This is called ’emotional branding’ and Nike is a master at it.

The numbers speak for themselves when it comes to Nike’s presence on social media. They are overshadowing the competition with ease on this platform, and have been setting trends as well.

Their social media team knows how to capture the attention of their followers. Nike uses hashtags to create a lifestyle leading its fans to have a sense of community. The tweets are short but punchy and always included with a #justdoit.

Their approach has created a two-way interaction between the brand and the fans, and that is what helps Nike marketing strategy stand out from others. They have optimized this space by creating a sense of community in terms of connection with the followers. Tell us what you think about Nike in the comments! 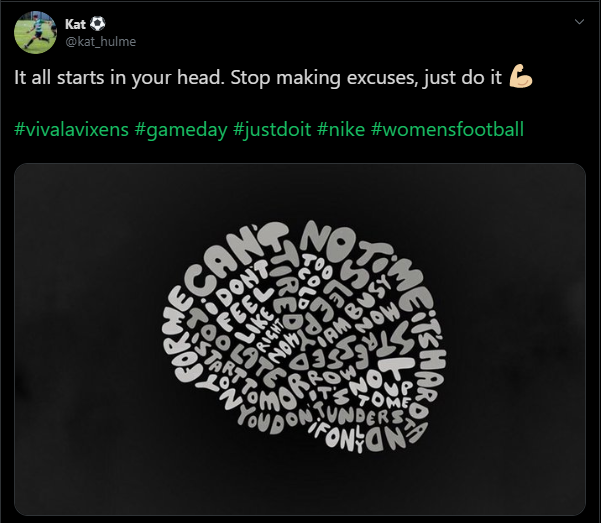 They project strength, determination, and passion. After watching, it makes you want to get out of your comfort zone and push yourself to get the job done. Whether you are looking to build a community on social media or drive engagement on your campaigns, you must take Nike as the inspiration. Give your followers a reason to engage with you. Get mentioned. And the results will invariably follow.

Having discussed the social media and ads strategy by Nike, let’s move on to the third prong of Nike marketing strategy – Influencer Marketing. The audience of Nike is versatile as it consists of rappers, athletes, entrepreneurs, and people from different walks of life.

– One of the best examples of them capitalizing on this was the Colin Kapernick controversy. The ex-NFL quarterback did quiet protests against the brutality towards African Americans by the police. He kneeled during the American national anthem and posted an image of himself with a quote and #JustDoIt. 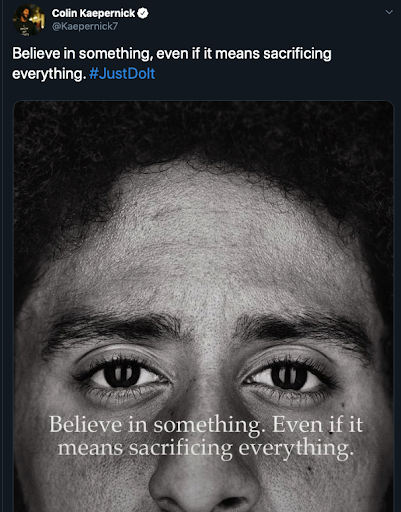 The results were absolutely phenomenal, as Nike got a surge of 1,400% in its social media activities and earned $6 billion in sales. Of course, there were some negative reactions, such as some people suggesting to boycott Nike and its products. But, any publicity is good publicity.

– Another example was of the FIFA Women’s World Cup in 2019 ad that the brand ran after the USA won the cup. It spoke about women’s presence in the sport, and how this team will be greatest in the world, regardless of gender.

The World Cup turned out to be another spectacular event for the brand, where they sponsored 14 out of 24 teams. The official sponsor of the tournament was Adidas, but once again, Nike got the limelight by being smart and utilizing its presence on social media

– The brand has also collaborated with hip-hop musicians such as Kanye West and Pharrell Williams.

Back in 2009, West and Nike came up with Air Yeezy, an official sneaker – the retailer’s first collaboration with a celebrity who wasn’t an athlete. They did the same with Pharrell Williams and his group N.E.R.D to release limited edition Dunk High sneakers with a logo of a brain in its heel. Only 1050 sneakers were launched, and now they go for upwards of $700 a pair!

One of the key aspects of Nike has been towards empowering women and giving them a separate platform to shine as athletes. The brand ran a fantastic campaign on  Serena Williams, where it said that she’s not only the greatest female athlete – but the greatest athlete, period.

And it is not just about empowering women in particular. Any group of individuals that deserve a special mention – Nike gets right on it. From social media to conventional marketing, there is an impeccable consistency in the way Nike goes about it.

To be great, you gotta learn from the greats. With these 3 takeaways from Nike’s marketing arsenal, you can begin discovering the holes in your ammo and fix them quickly to start building a solid marketing foundation.

It’s time to just do it!

Link-building tactics for PROs to win in 2020.

Tips to select the right marketing channels for maximum ROI

Visual Search: Everything a marketer should know