SEO tactics from the dinosaur era: Why you should stop them, and what to do instead

Did you REALLY just buy backlinks for your site?

You might be aware of the meteor that hit the Earth, millions and millions of years ago, and wiped off the dinosaurs. But people still continue to talk about them and even be fascinated by them. The same holds true for certain SEO tactics and strategies. While being fascinated by dinosaurs is understandable (have you looked at them?!) – the scenario is a bit different when it comes to the SEO tactics from the dinosaur era.

Maybe because of the lack of any meteor here, those age-old SEO tactics still seem to be widely practiced. They’ve been around for ages, and are too entrenched in many of the SEO experts’ “toolkits” – but they don’t work anymore.

Simply because Google has evolved over the years, and so has its algorithm for ranking pages and content.

Those archaic strategies might seem good – so much so that you wouldn’t even dare question their legitimacy. But, each of those SEO tactics, as Mr. President would put it… 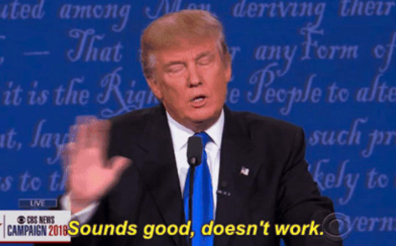 Continuing our metaphor, let this blog post act like a meteor to help you wipe away the dinosaur SEO tactics. You never know, maybe that’s why you’ve always been struggling to get the sweet spot in Google rankings.

Most brands aren’t happy at achieving the first SERP rank. They want all 10! Historically, if you were looking to completely annihilate your competitors, here’s what you’d do:

Add a bunch of subdomains to your website. Either that, or you could register several separate domains, ensuring that you’re able to “control” that top 10.

Most web hosting companies were guilty of this. Small business services that offered one web-related service or another also did this a lot, especially if there were a lot of competitors. But this doesn’t work anymore.

Like we said earlier, Google has matured (it’s 20 Y/O now, and the terrible teens have passed). It has started giving priority to multiple subpages in a single SERP from a single domain.

Google now lists a bunch of queries (both branded and unbranded) from the same domain – together. Remember the time when you searched for a generic question, and you got 10 Quora questions, bundled as one? That’s exactly what we’re talking about.

Likewise, if you were to search for any business-related topic, you’d find that websites like LinkedIn Pulse and Entrepreneur.com show up multiple times for the same search – but as a bunch.

As Captain Haddock would say, 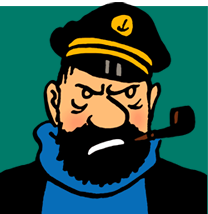 Nope, we don’t imply you should go fishing. What we’re talking about, instead, is Barnacle SEO. Just like Barnacles attach on a ship, it’s beneficial for smaller sites to attach themselves to other, bigger sites.

Allow us to go all in with our dinosaur metaphor (we told you, we’re fascinated by them):

Imagine, for once, that you operate a dinosaur museum. But no matter how hard you try, you’re just not able to rank on the SERPs. There are too many other dinosaur museums out there, for your museum to ever make it.

How do you go about this, then?

How about answering Quora questions from your official account? Or maybe contributing dinosaur pictures to Wikipedia pages? The trick is – whenever you see a gap in a larger website, try finding ways of filling it with content that’s branded as yours. Platforms like Tumblr, Medium, Zomato, Yelp, etc., have networks that your site does not. Optimizing your content on them will definitely give you more visibility.

Another alternative to this is a hosted subfolder. It is especially a good idea if you already have a decent domain authority. Hosting your blog on a subdomain will not only give it the leverage of your current domain, but also help its ranking because of the relevant quality content.

Google AdWords data has been the holy grail of SEO and keyword research for too long a time now – we think it should retire.

But many SEO “experts” aren’t quite letting it go. Even today, while websites have modernized and diversified – both in terms of design and content – this still seems to be the first point of entry. Many SEO optimizers still harp on ad nauseam about this tactic’s accuracy.

The truth, however, is that the numbers and queries it presents isn’t a complete reflection of everything happening on the backend of Google Search.

AdWords and Keyword Planner have a glaring problem. They seem to group certain keywords on a whim – even if it doesn’t make much sense (we can’t blame them, it’s how their algorithms were developed).

For instance, “Search Engine Optimization” and “SEO” will be collapsed into the same category, and display the same monthly search and bid price numbers.

This is aggravated, when you, as a business, optimize for both – not knowing they’ve been clubbed together. And then you hope for double the click-through rates, because the graph that’s shown doesn’t unbundle the two terms, despite them having different traffic.

Another issue is that the Keyword Planner collapses the words that stem from each other. So, you’d find that words like “search”, “searches”, “searching”, etc., will all show the same amount of traffic – while it is quite evident that this should be far from being possible.

To add to all of this, the average monthly searches shown are way too broad, and they seldom align with Google’s own Trends tool. Further, it also hides the keywords that don’t seem to have a strong commercial intent.

Clickstream to the rescue!

What is clickstream, you ask?

At its most nascent level, it’s every web page a user visits, and the entire “stream” of clicks they generate along the way.

So, what’s the hype about?

Historically, this clickstream data was available only to the domain owners. With recent advancements in the algorithms, we can now accurately construct this information. Thereby having a much more detailed picture of people’s actions on the internet. Everything from how they conduct their searches, to the most searched keywords, to basically everything, can be found out seamlessly.

Tools like SEMrush, Ahrefs, Keyword Explorer, etc., are a blessing for this. Not only do they show you accurate CTR percentages and proper keyword traffic, they also don’t bundle “similar” keywords.

Tactic #3: Obsess too much over keyword placement

Keyword placement is something that’s been obsessed over way too much, and we think it should really stop.

Worrying too much about H1s and H2s, keyword placement in those tags and areas, ensuring that keywords follow the exact syntax that AdWords told you, etc., is of little help today. And in all honesty, all this obsession is better suited to a million other things that will definitely yield better results.

See, don’t get us wrong. We’re not saying it doesn’t work. You definitely need to have the keyword used in the title, but it’s crucial to focus on other things that Google considers significant.

Having said that, you’ve got to have your keyword in the headline. It’s okay if it’s not in an H1 tag, or not of the exact format as you’ve been told by the keyword. It’s okay, trust us.

Talking about things that Google considers significant – giving their users the most personalized and accurate results.

Instead of being overly obsessive about things that matter little, try obsessing over related keywords and topics. Google doesn’t care if your keywords are in a specific “tag” as much as it cares about its users getting the content that solves their queries.

Researching for related topics and related keywords – and curating content around it – has often helped businesses improve their visibility in the search engines. It should be pretty understandable, too, considering Google’s topmost priority is quenching the thirst of their users with the most meaningful content – content that is precise, accurate, and relevant to them.

Tactic #4: Just focussing on being “number 1”

This is the T-Rex of SEO – the oldest and the baddest – it’s likely to eat your site (and the authority that you’ve built) alive, if you don’t conquer it.

You’ll probably find thousands of (self-acclaimed) SEO “experts” who talk about making you the numero uno in the organic search rankings as if it’s the only thing that matters.

Let’s be real for a moment – there are more than 2 billion (!!) websites today. Do you really think it’s possible to rank first in all the possible keywords relevant to your business? We don’t think so.

So then, is all hope lost? Should you find out the ways of getting a refund from GoDaddy and give up on your dreams? Not really. There are better, and smarter, ways of gaining visibility.

See, you’ll probably never got an ROI on the amount of money you’ll spend on getting to the top of the Google rankings. If, however, you focus on other SERP features, like the featured snippet, you might be in for more.

The featured snippet is often used with voice search – and unlike traditional searches, voice searches can even choose from the 10th number on the SERP list. Also, if it helps to know, the CTR on voice searches are astronomically high.

The other things that you can focus on, are, Image SEO – to help you rank better on Google Images; long-tail keywords that are both voice friendly and also devoid of much competition. You’re aware that we tend to search longer phrases when using voice instead of text. In a similar vein, make those keywords as local and specific as possible.

Tactic #5: Using only link building to move up the rankings

This is the most brute-force of way of moving up the rankings. And like the other brute-force methods of accomplishing anything, it might work, but it won’t be worth it.

As soon as people realize they’re on the second page of Google, their instant impulse is to exploit link building, hoping that’ll help take them to the top. But that’s no longer the case.

Like we said earlier, Google has become all the more strict with its guidelines. Before 2011, once you were sort of in the consideration set (page 2 of Google), this was the method to get you higher up. But post the advancements in Google’s algorithm, this is no longer the case.

Because, as we said earlier, Google cares a lot about its users.

Searcher task accomplishment involves optimizing your content in ways that help the user find out exactly what they’re looking for. The more optimized your content is, the more Google will push you up in their rankings – seeing you’re providing something of value to their users.

Other than that, it’s recommended to upgrade your site’s content frequently with more meaningful and updated items. And while doing that, you shouldn’t let “user experience” slip to the back of your mind. Optimizing your website’s content in a way it’d be easy to go through, from a UX standpoint, will ensure Google that you’re actually trying to help people.

Also, if you wish to unseat already highly ranked pages, these techniques are often much easier to implement and end up being more fruitful.

At this point, it’s good to introspect and find out which of these Dino-strategies you’re still relying on. And while we’re at it, just retire them in peace, and move on to better things, that are known to work.

And, also, if you have any doubts, or seem to need a helping hand, the good folks at ContentNinja are always at your disposal. Visit us at www.contentninja.in and let’s help you?

How to use Google Trends for SEO